Review: How to set up a Workers’ Co-op 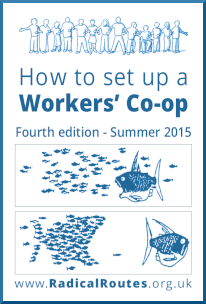 This is a great book. If you are planning on setting up a workers’ coop in the UK, this is definitely the first book you should pick up. And it’s free. You can download it as a PDF from Seeds for Change, although I bought the spiral-bound version from AK Press (the excellent Scottish/Californian workers’ coop), and I think I prefer it in that format. It is the sort of book you could see lying around a new workers’ coop, getting dog-eared from frequent use.

Many of the books I have reviewed here are aimed at US cooperatives, and much of the advice for new coops would be the same anywhere, but the legal side of setting up a worker-owned business is very different from place to place, and so the most important chapter for UK residents would definitely be Chapter 8: Choosing your legal form, where the authors go over the different kinds of business forms open to coops in the UK (e.g. company limited by guarantee; co-operative society; limited liability partnership, etc.).

This little guide has gone through many editions over the years, penned first by the Catalyst Collective in 1994, updated by Radical Routes in 2003, and again by Footprint Workers’ Co-operative and Seeds for Change in 2012 and 2015, with a minor re-edit in 2019, the most recent edition. The cooperative provenance and so many hands gives you a lot of confidence in the advice. The folk who contributed over the years really know what they are talking about.

This won’t be the only book you will need to read and the authors are honest about this. This little guide ‒ just 116 pages not including the appendices ‒ is more of a roadmap, laying out the territory, but leaving it up to the reader to read other books or seek training in the details, and rather than a weakness, this is its greatest strength. Starting a business can feel so daunting; you need to learn so much, it is really encouraging to see the whole process set out briefly, with very little jargon. It makes it feel much more do-able.

But this brevity comes with compromises. Some stuff was left out:

These points to one side, this really is an amazing little book, and I cannot recommend it highly enough!

This entry was posted in Book Reviews. Bookmark the permalink.