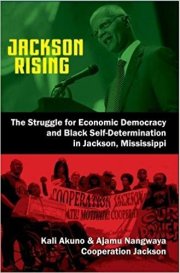 Jackson Rising is a recent collection of essays about the growing movement for economic democracy and Black self-determination in Jackson, Mississippi, USA. Edited by local activist, Kali Akuno, and the academic, Ajamu Nangwaya, Jackson Rising was published right at the end of last year, so it represents an up-to-the-minute account of this movement. Jackson, Mississippi, is a very poor, Black-majority city who’s population has suffered under some of the worst systemic racism in the US, but in June, 2013, a long-time Black activist and civil-rights lawyer, Chokwe Lumumba, was elected mayor, and his administration adopted a radical plan for the regeneration of Jackson that was founded in part on establishing a network of worker cooperatives in the city. In Nangwaya’s words, the plan was to “transform the city of Jackson into America’s own Mondragon.” (p. 110)

Sadly, Chokwe Lumumba died unexpectedly, just eight months into his term, but in June, 2017, his son, Chokwe Antar Lumumba was elected mayor in a landslide victory, and intends to continue his father’s work. Chokwe Antar Lumumba’s electoral victory was a resounding popular endorsement of his father’s regeneration plans, but critically, the movement in Jackson is much bigger than than just these two men. Centered around the organization, Cooperation Jackson, a broad base of local activists have come together to set up this network of worker-owned businesses.

Readers of this blog will find Jackson Rising both inspiring and thought-provoking, but it should be noted that this collection of essays does not provide a detailed account of the practicalities of setting up worker cooperatives in the Southern US. Rather, the authors in this volume explore the theory behind the movement and how they understand worker-ownership as a key strategy for advancing civil rights and Black self-determination in the US. I learned a lot about the history of my own country from reading this volume, and in the end, Jackson Rising left me feeling exited and profoundly hopeful.

This entry was posted in Book Reviews. Bookmark the permalink.